برگ نخست Features in English From Baghdad to Tirana, Mojahedin and three decades of Wandering Existence

The departure of the remaining members of the People’s Mojahedin Organization of Iran (MKO) from Iraq brought to a close the final chapter in the group’s 30-year presence in Iran’s neighbouring country.

Although the MKO played an active role in the 1979 revolution in Iran, it soon came into conflict with the revolutionary state forcing its leaders and hardcore activists to flee Iran in 1981 and re-establish their base in a Paris suburb. But after pressure from the French government, and the offer by the Iraqi government to offer a new home to the group, the MKO moved its base of operation to Baghdad in 1986. The move followed a meeting in Paris in 1986, between Masoud Rajavi [Secretary-General of MKO] and Iraq’s Deputy Prime Minister  of the time, Tariq Aziz.

Saddam Hussein allowed the MKO to set up its operation at Camp Ashraf in the Diyala province, about 80 kilometres from the Iran-Iraq border. The name, Ashraf, was chosen in memory of Masoud Rajavi’s first wife, Ashraf Badei, who along with more than 20 other MKO members were killed at a group’s safe house in Tehran on 8 February 1982. The group was also given a building across the street from the infamous Abu Gharib Prison in Baghdad, where it set up its command centre.

The MKO turned Camp Ashraf into a housing complex fully equipped with a dormitory, sleeping quarters, a canteen, a gym, a hospital and a radio and television station and even a cemetery. After the fall of Saddam Hussein, Iraqi military and Shia militias with the direct support from the security and military forces of the Islamic Republic of Iran attacked and maimed MKO members.  At the same time US forces surrounded Camp Ashraf, disarmed and transferred the residents a new base in a Baghdad suburb, called Camp Liberty.   A number of the MKO leaders fled and returned to Paris.  The group comprised Maryam Rajavi, the current President of the MKO.

Camp Ashraf remained under the control of the US forces until 2008, at which time it was handed over to the Iraqi forces. The military camp was attacked numerous times after Iraqi forces took control of the place, resulting in the death of dozens of MKO members. The last attack occurred in September 2013 during the relocation of the residents from Camp Ashraf to Camp Liberty. Out of 100 MKO members who had remained at Camp Ashraf 52 were killed and another seven were captured and sent to Iran.

Since the final attack on Camp Ashraf,  the whereabouts of Masoud Rajavi has been shrouded in mystery.  At the annual gathering of MKO and its affiliates outside of Paris on 9 July 2016, the special guest speaker, Saudi Prince Turki bin Faisal Al Saud, who served as director general of Saudi Arabia’s intelligence agency, from 1977 to 2001 and was later ambassador to Britain and the United States,  twice referred to Masoud Rajavi as the “late Masoud Rajavi”.  Even though the spokesman for the MKO, denied that Rajavi had died, the organisation has not released any photographs or footage or even a voice recording to put an end to the rumours.

To date, the Saudi Prince has not retracted his comments. 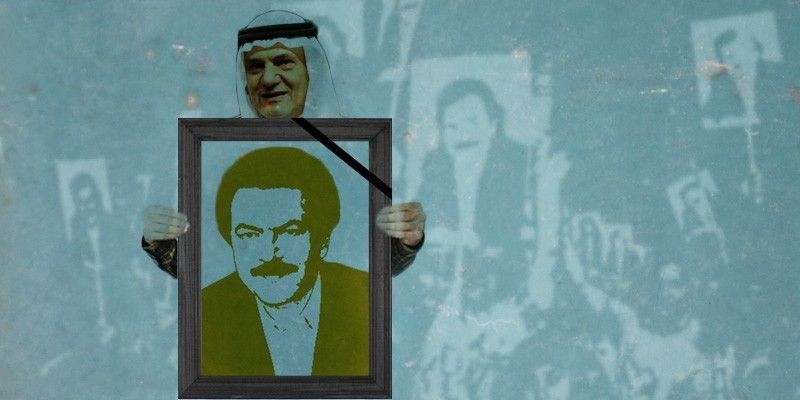 Camp Liberty was hit by rockets and mortars in 2013 and 2015. An Iraqi Shia paramilitary group claimed responsibility for the attacks. Although dozens of its people were killed and wounded during each attack, the MKO didn’t make any effort to move its members out of Iraq. After pressures from the Iraqi government, the Islamic Republic of Iran and mediation by the US, sixteen MKO members went to Tirana, capital of Albania in 2014, to lay the groundwork for the relocation of the whole group to that country. Following an agreement with the US, the Albanian Prime Minister, Edi Rama, allowed MKO members to settle in Tirana. Two years before that, 600 MKO members had already relocated to Albania. Subsequent to that move, more MKO members travelled to the Balkan state, raising the total number of them living in Albania to 2000.

MKO victory and the defeat of the Islamic Republic!?

Maryam Rajavi, described MKO’s departure from Iraq after 30 years of activity in that country, a “great victory for the resistance” and a major defeat for the “clerical regime”. Maryam Rajavi, who is called “president elect” by his supporters, didn’t produce any proof of the MKO’s “great victory” or the major defeat of the “clerical regime”. How does leaving Iraq after years of aimless wandering and the loss of hundreds of unarmed members of the group whose death could have been prevented if only the MKO had left Iraq a few years earlier – constitute a victory? These are the questions on the minds of the surviving members and the families of those killed, that the MKO leadership, will have to provide answers to, sooner or later.

US efforts to relocate MKO from Iraq

The US Secretary of States, John Kerry, described the relocation of the MKO as a diplomatic victory for Washington. John Kerry was highlighting the humanitarian aspect of transferring the MKO from Iraq to Albania. During a news conference, Secretary Kerry described the resettlement of the MKO members as a “ significant achievement of the US diplomacy”, adding that the move had saved 3,000 people whose lives were in danger.

The case regarding the plight of MKO members in Iraq came to a close on 30 August 2016. The departure of the MKO from Iraq and the resettlement of its members in Albania and other European countries such as Germany, Norway, Italy, Britain and Finland may mark the start of a new chapter in the life of this group. However, how will the group be able to recreate, in Albania, the solidarity that it enjoyed in a camp surrounded by a high wall? The group spent a long time worrying about its survival and safety in Camps Ashraf and Liberty. It had limited access to a news that was carefully filtered. The members never had time to reflect upon their aimless wandering existence. But now that they are living in relative safety and in a less restricted environment will they remain loyal to an absent leader whose whereabouts is still unknown?