برگ نخست Features in English On Trial in Iran: A Dual National Accused of Stealing $40 Billion

Mehdi Shams, a British-Iranian dual national, faced the notorious Judge Moghisseh during the first two sessions of his retrial, held on Saturday and Sunday. 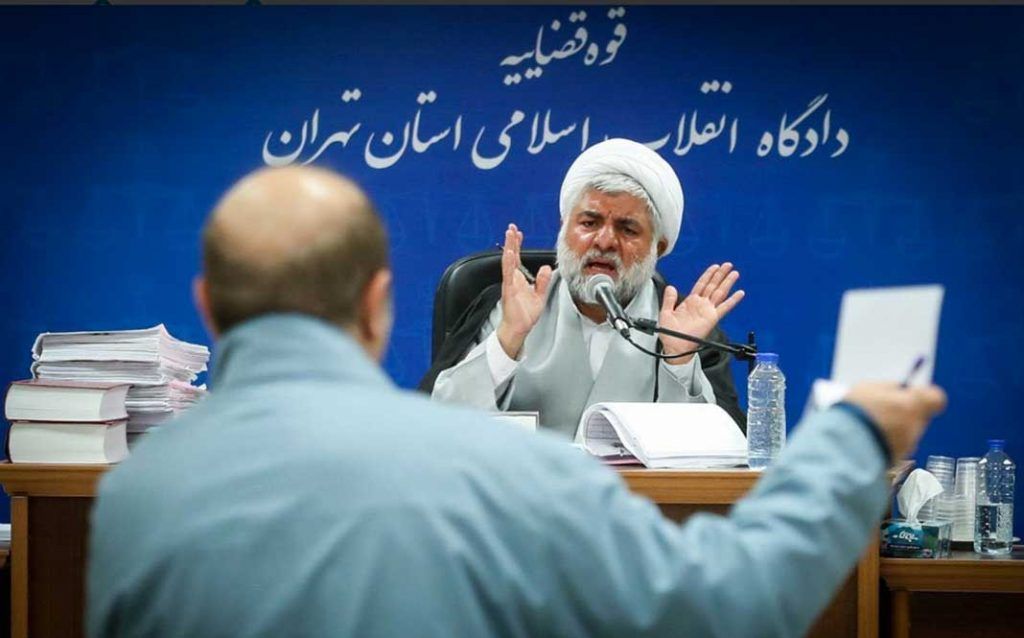 Shams is accused of being an accomplice of Babak Zanjani. The latter is accused of embezzling 3 billion Euros of proceeds from the sale of Iranian oil, via circumventing the sanctions on behalf of the National Iranian Oil Company.

A previous trial had found Shams guilty and sentenced him to death but the Supreme Court ordered a review of his case.  Iran’s newspapers have reported the entire re-trial, which is held in the open.

Shams’s case is significant for Iranian dual nationals. There are important lessons to be learnt for those who may be lured into doing business with the Islamic Republic. Chief among them is that despite lucrative profits, the consequences of working with the Islamic Republic can be severe and even lethal for those whose usefulness passes its sell by date and when a scapegoat is required.

Judge Moghisseh is well known for the exceptionally harsh sentences he has handed down, even by the Islamic Republic standards. To this date, his name alone can strike fear and terror in the hearts of the accused facing him. His photos were published for the first time ever by Iranian media reporting on Shams’s hearing.

Moghisseh was a member of the Kangaroo courts, which summarily sentenced thousands of Iranian political prisoners to death in 1988. He also handed down sentences which led to the execution of Baha’i leaders,  as well as long term imprisonment of 2009 Green Movement activists. In April 2011, the European Union named him as an individual subject to sanctions for human rights violations.

According to transcripts of the hearing, Shams’s British citizenship seemed to be enough reason to prove his guilt.  During the first session, after reading out the indictment against Shams, Moghisseh said, “it is regretful that the sale of oil is given to someone like you, who has UK citizenship.”

Shams replied “I obtained UK citizenship with the permission of the Iranian officials. I can not explain the reasons in an open public trial.  If you deem it is necessary, I can do so in a closed private session.”

This suggests that at some point Iranian officials encouraged Shams to obtain UK citizenship to help him circumvent the oil sanctions.   His UK passport has now become the reason for his troubles.  Several times, Shams attempted to prove his real loyalties were with the country of his birth and not with Britain where his family resides.

Shams told the Judge, “We were told by the Iranian officials, we are taking part in an ‘economic Jihad’ and were doing service to the country… I am proud to die in in my country, I have no regrets but the injustice I have suffered that has resulted in the breaking up of my family is wrong.”

The accused claimed that the mental pressure he had been subjected to during his solitary confinement had pushed him close to committing suicide on at least 3 occasions.  Accusing him of playing the victim game, the Judge warned him, “You have inflicted enough damage against the regime, do not use this opportunity for more propaganda against the establishment.”

Judge Moghisseh also played down Shams’s claim that his predicament had caused the breakup of his family, “Is it our fault that your family reside in Britain and have not bothered to come to Iran to visit you? It is not our fault, they have been free to come and visit you.”

Shams complained that from the outset, his lawyers have not been allowed to properly review his case.  “The interrogator did not allow the lawyers to review my case,” Shams complained during the first session on Saturday.  The Judge dismissed this as irrelevant, “That was during the preliminary stage and for security reasons.”

Shams retorted, “But even today I was not allowed to meet my lawyers.” Losing patience, the Judge reproached him, “You are not here to talk about anything you want, just answer the charges!”

At times Shams, seemed to have given up on the impartiality of Judge Moghisseh. On the second day of his retrial, he complained, “Your honour, you seem to have already made up your mind.”

Judge Moghisseh replied, “I am the only one in this court with no preconceived ideas, I pass judgement based only on evidence. I neither know you nor am I related in any way to the prosecutor.”

Shams also tried to dismiss the financial basis of the prosecution’s case. “How is it that the entire debt of Babak Zanjani is 1.2 billion Euros and you accuse me of stealing $40 billion? The figures in my indictment make no sense.”

Judge Moghisseh did not seem worried by the discrepancy. He replied, “That is all irrelevant, the main accusation is that you were Babak Zanjani’s partner, we will deal with the accuracy of the figures in due course.”

The main thrust of the indictment against Shams is that he misrepresented Babak Zanjani as a bonafide successful businessman to the Central Bank of Iran and the cabinet ministers. The indictment alleges that officials were duped into appointing Babak Zanjani to circumvent the oil sanctions and sell Iran’s oil abroad.

Dismissing these charges, Shams pointed out that both the Minister of Oil as well as Heydar Moslehi, the Minister of Intelligence at the time, had already made the recommendations. “Who was I to say otherwise?”, Shams asked the judge.

He continued, “I am not Nostradamus,  How could I know Babak Zanjani would not return the money? All I did was to hire a lawyer and a financial adviser in England and obtain $4 billion of financial guarantees from the FAL group in UAE. I was a university lecturer in Britain and did some business on the side.  I was asked to help the country bust the sanctions. I was asked to come to Iran to help retrieve the money that is missing and instead I was arrested.”

In order to dismiss any preconceived idea by the judge that Shams had any loyalties to Britain, he finished his defence during the first session by saying “I am under investigation by the British government for circumventing the sanctions and helping Iran.”

Judge Moghisseh brought the second session of the re-trial to an end by declaring the next session will be held in seven days time.